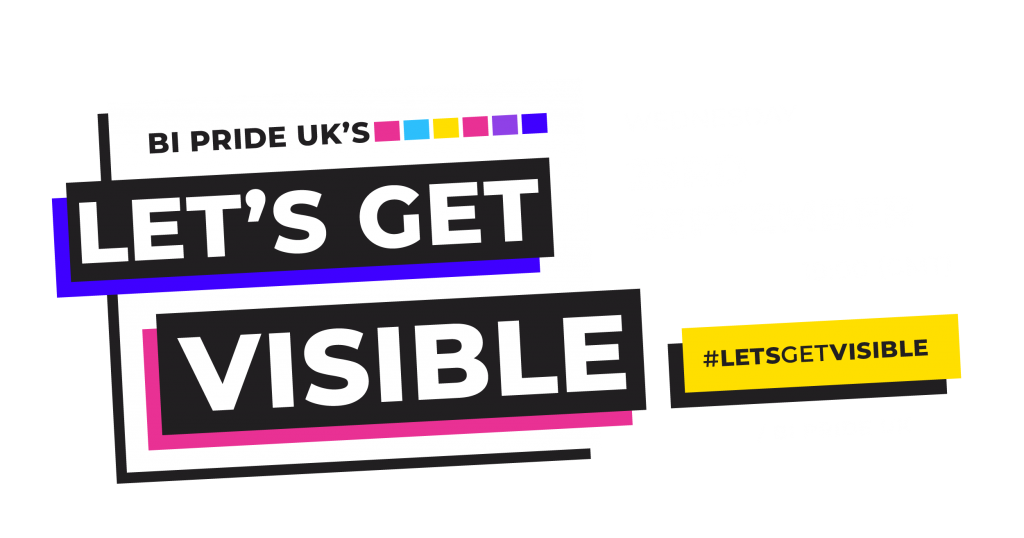 Our fab-bi-lous panellists will be reflecting on 2020 – a time of lockdown and #BLM, and discussing what can we learn from this life-changing year

How can I join in?
At 7pm on Thursday 23rd September we will be hosting a Virtual Panel to celebrate Bi Visibility Day. Tune in on Youtube, Facebook and Instagram.

Is this a free event?
Yes, but donations will be gratefully accepted to keep our community going!

Who will be performing and speaking?
Panelist details can be found at the tab above.

I can’t tune in on the day. Will I be able to watch afterwards?
We will upload the full video to youtube after the event.

Is the event suitable for all ages?
Bi Pride UK is family friendly and inclusive at heart. If there are any adult themes in the later performances we will let you know beforehand.

What accessibility will there be in place?
Our Accessibility report is available at the tab above.

Sade is a TV Presenter, Actress and Media Personality, who also works as a freelance Content Creator and videographer.

She’s a proud L in LGBTQ+ and a firm advocate for mental health and wellness. Sade believes in the continued struggle for equality and representation for all LGBTQ+ humans, including ethic minorities

PearlNatasha was born in Zimbabwe and raised in Derry, Northern Ireland from age 10. Having released her debut single in 2015, “Autumn Sky”,  PearlNatasha has toured and performed at international festivals, been featured on BBC Radio and been regular panellist on shows speaking up about racism in music, the impact of Brexit to musicians as well as being an activist for the Me Too movement. 2020 has seen PearlNatasha release Moved On, with her debut E.P G.R.W.N due late 2020.

Jesse is the partnerships manager and recovery worker for The Outside Project, the UKs first LGBTIQ+ crisis homeless shelter. He has been involved with the project since its first pilot – which took place on a disused tour bus three years ago and now works on-site at their 24/7 shelter provision in a disused fire station. He lives in a converted disused office in Harringay with his cat, who is called Bruce.

Jake Edwards (he/they) is a non-binary activist with previous success in running a YouTube channel, which focussed on educating people about many aspects of trans and queer identities. They currently run the social media channels for Mermaids in the Communications team. He has also appeared on HuffPost, MTV, BBC3 and many other platforms, talking about his experiences as a trans person.

Dee Chanelle is a London based Trans Artist/ Entertainer on a defiant quest to break all barriers. Frontwoman and lead singer of  “Dee Chanelle & The in-Laws”, a band born out of diversity and individuality- Free from the stereotype of race, gender, orientation and age. She is currently recording her debut album and composes her own songs sharing an array of real life experiences. Her single “Better Days” released earlier this year is testament to empowerment, letting go of toxicity and promoting positive thinking.  “In this day and age, music and entertainment has become even more of a prime platform to send positive messages across social media. If I inspire and help even one person get through a hard day, then my job is done!” says Dee.

For music, photos and videos feel free to visit her official website www.deechanelle.com

CHIYO is London’s award-winning Prinx of Provocation. An unapologetic Drag thing, Sex Worker, and Writer. CHIYO is currently a finalist for Mr Gay England 2021 and the reigning “Performer of the Year” according to the Sexual Freedom Awards.

We are so thrilled to be celebrating Bi Visibility Day with a virtual event, and hope you’re  looking forward to it  as much as we are! Below are some further details around how you can access the event.

The event will be pre-recorded and will stream simultaneously on YouTube Live, Facebook Live, and Instagram Live. All three  platforms have a live chat function, so you can interact and take part in the action. All three platforms are accessible to those using screen readers.

BSL interpretation will be in place for the entire event, provided by Max Marchewicz.

Closed captioning will be available throughout the entire event.

All of the speakers and performers will describe themselves and their surroundings prior to their contributions.

In order to highlight any potentially triggering or upsetting content, content notes and trigger warnings will be included at the beginning of each contribution.

The event is completely free to attend, and all contributors have been paid for their time.

We do not tolerate prejudice, discrimination, or abuse of anyone on the basis of their gender identity or gender presentation, sexuality, race, ethnicity, class, visible or invisible disability, nationality, religious or non-religious beliefs, language abilities, age, or body shape.

In this vein, the chat spaces on YouTube, Facebook, and Instagram will be moderated by BPUK volunteers. They will work hard to monitor, flag, and remove any examples of this. But unfortunately, as this is a public event, we cannot guarantee that the chat space will be completely free from trolls.

Rest assured, we will endeavour to make this as safe and joyous a space as possible.